You are here: Home1 / Noticias2 / Current events3 / The most expensive seafood in the world, fed by microalgae

The abalone, or sea ear, is one of the most expensive delicacies in the world, and one of the biggest productions in Europe is located in Muros (Galicia, Spain), in the Galician Marine Aquaculture (GMA) plant, focused on the development and culture of new saltwater high-end species destined for international markets. We are talking about a leading company, both because of the technology they use and its global market management.

One of the biggest technologic challenges they face has been the reproduction for the competent larvae obtaining, which fixes to the settlement shields, and then, they become in post-larvae or little abalones; this challenge has been successfully overcome. That is why, although they had planned the spawning process only during the summer, now they have lengthened until the autumn, and even winter.

In order to be able to continue with the larvae culture, it has been necessary to increase the microalgae production. For that, they have counted on Aqualgae collaboration, in the photobioreactors and raceways implementation, in order to achieve the microalgae required productions.

Another challenge is to beyond the post-larvae stage, where there are two critical moments: the first one is the settlement, where it is wanted an efficient larvae percentage of which its biofilm fixes to the shields; the second one is the microalgae nutritional value along the time, taking into account that is a development stage which lasts from 3 to 4 months until their size is between 4 and 8 mm, and consequently, the microalgae nutritional value along the time, as their unique food source, is fundamental.

Thanks to the partnership with Aqualgae, they obtain nutritional optimum levels of microalgae, applying a range of enrichment procedure, working with new microalgae strains, with new intensive production methods in photobioreactors and new biofilm enrichments. 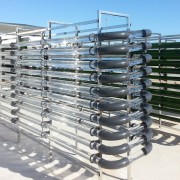 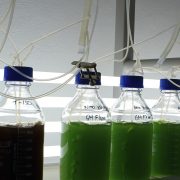 Myths and Realities II – Supplementation of microalgae cultures with CO2 – is it worth it? 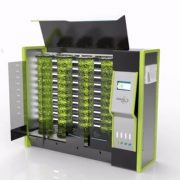 GreenUpGas project, the first upgrading technology based on a 100% biological...